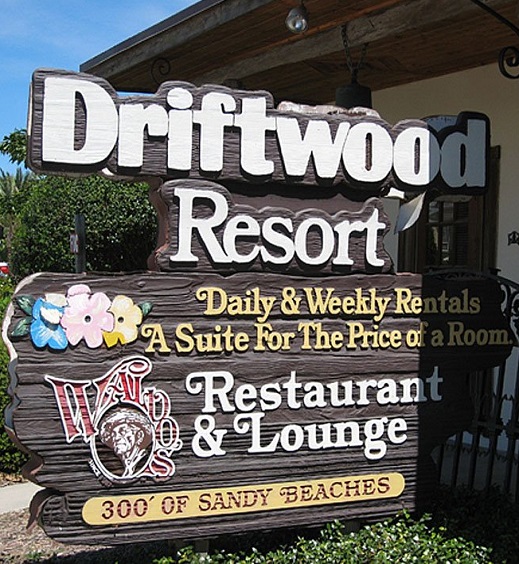 Below you will find a list of important information about The Historic Driftwood Resort.

The Driftwood Then & Now

The Original Driftwood - Waldo E. Sexton(1885-1967) built the two buildings which comprise the Driftwood Inn and Restaurant in 1935. Waldo has been called "one of the most colorful persons that Florida has ever known," an "imaginative entrepreneur," and an "outrageous, old time eccentric." He moved to Florida in 1914 and began his legacy that includes several buildings still standing in Vero Beach today and was an integral partner in the development of McKee Jungle Garden, also in Vero Beach.

Driftwood Inn and Restaurant was originally a private beach house called the "Breezeway" by its owners, Waldo & Elsebeth Sexton, because of the opening in the central portion of the first floor. Construction of the house began in about 1935 and was completed in 1937. Though originally built as a family home, within a short time it was being operated by Mrs. Waldo Sexton as a small resort hotel and because there was no restaurant in the vicinity of the Driftwood Inn, Mrs. Sexton began to cook breakfast for the guests in the family kitchen.

This success led eventually to the founding of the adjacent restaurant. Waldo's Restaurant was constructed in 1947. Waldo continued to expand the Driftwood complex after erecting the inn and restaurant. A small office was built in 1949. In that year he also moved in a row of fishing shacks that were used for guest rooms and later, for small shops. They were converted back into guests rooms in 1986. In 1963 a 15 unit apartment building was added, just west of the original Breezeway building.

Waldo's son, Ralph, erected the four story building to the south in 1965, providing more apartment units. Two more apartment buildings are now part of the Driftwood Resort, and all apartments and guests rooms on the property were converted to interval ownership in 1979.

The New Driftwood - Two hurricanes in 2004 did substantial damage to the property but it reopened in 2005 and retained all the history and ambiance it has always had. With the help of local architect, John Dean and longtime property manager, Jeanne Radlet, the buildings were restored and stand today as a testament to Waldo Sexton, the entrepreneur and eclectic individual that built these structures nearly a century ago.

The Driftwood Inn and Waldo's Restaurant feature a rustic "beachcomber" ambiance. While structures of similar style may be found elsewhere in Florida, few are comparable in scale or complexity of detail The two original buildings are unique in the Vero Beach area and continue to serve their historic function of providing accommodations and amenities for tourists. Both were added to the U.S. National Register of Historic Places in 1994. The inn and restaurant continue to operate today, renting rooms to the public on a daily or weekly basis and serving lunch and dinner poolside and Oceanside from Waldo's Restaurant.